I am finding it hard but, I have decided to adopt the American spelling of the word donut.

I have also decided to blog two separate posts on one page. All these changes, I don’t know what is coming over me? 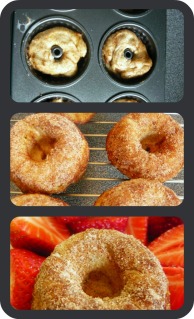 The first donut type thing was a flash of inspiration last night and a way to use my very cute new tin. As I have a tub of 5 minute bread dough in the fridge I thought I would see how close to baked donuts I could get without really doing much at all. My not much at all involved a bit of melting and some stirring. I wouldn’t call these classic donuts but more a cross between the American pretzel and a baked donut. They were good.
I melted about 15 grms of butter and mixed enough cinnamon and sugar to make me happy.
Grabbed a handful of dough, kneaded into it-2 teaspoons of the sugar and cinnamon mix and the melted butter.
When it was mixed through I divided the dough into 6, kneaded each into a little ball, and then put my finger through the ball to make a hole.
I dipped each ball into the sugar cinnamon mix and put into the greased mini bundt tin.
I left them to rise for about an hour.
I stuck them in the oven on around 200c
When they appeared cooked I took them out of the oven and dipped them in the remaining sugar cinnamon mix.
I then ate 2.
The next recipe, a bit of a cop out here, the photo of the recipe. If you can’t read it let me know and I will type it up. We were not overly impressed with the results, a lot more bread than baked donut. More like a home-made iced bun from the UK. 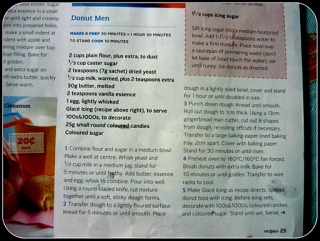 We were impressed with the laughter that went into making them. Miss Muffin had a friend to stay and they enjoyed making these, letting them rest, eating Wholly pizza and then coming home to bake and decorate. If you thought that only 8 year old boys have filthy minds, you were wrong. The completed donut woman in the picture is me, I have decided not to be insulted. 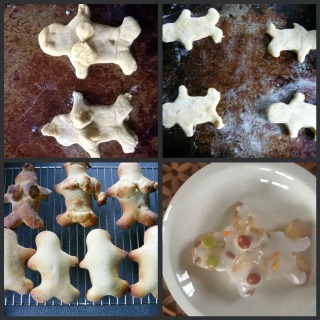 One thought on “Two types of donut or doughnuts?”

Got some @por.no.donuts delivered. So very good. See the page for flavours!
I had a lovely lunch! @t.lounge.wellington and their @wellyonaplate burger made my Wednesday. You have to go to experience the taste of Sri Lanka. Book a table!
Went local @khandallah_trading_co , great burger. Loved the candied bacon and I’m not a bacon fan. Slightly disappointed by the bun not being as mentioned
Support local. Mmm orange beef and those spring onion pancakes at Mr Ji’s Petone
Thank you for my prize @nznutters . I love happy Mail
We had the left overs from last night’s feast tonight. So good. I’m seriously impressed with @indianalley_wakefield . Can’t wait to dine in. Thanks @delivereasy.nz for bringing our food.